Skip to content
Those Who Leave Us Behind
OH, YES, I DO THINK OF MYSELF AS QUITE THE AUNTIE MAME…

Allergies, Shmallergies…It’s All About Loyalty…

I didn’t know it was a litmus test.

A trip to an allergist showed that I was vulnerable to a number of things, but none of them more than cats.

“Your boyfriend will have to get rid of the cat,” the doctor said.

“That’s not going to happen,” I replied. “Tell me what I have to do to live with Mr. Joe.” 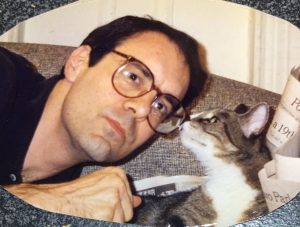 When I returned to Dennis’s apartment, he interrupted me right after I recounted the doctor’s declaration and before I could get to the punch line.

“That’s not going to happen. Mr. Joe was here first.”

And I loved Dennis all the more for his loyalty. Here was a man who took his commitments very seriously.

Allergy shots and inhalers and baths for Mr. Joe (don’t ask) restored my ability to breathe quite nicely. A few years after Dennis and I got married (and after our beloved cat passed away at a very old age), we moved from New York to Los Angeles so Dennis could do more film and TV acting. I missed Manhattan terribly those first few months, but then it was February and I was wearing shorts on El Matador Beach and I decided living in Southern California was going to suit me just fine.

Three years after we moved to Los Angeles, Dennis was diagnosed with stage four stomach cancer that had spread to his bones and lungs. He died in just under six months. But for the love and care of our family and friends and the three precious cats we had adopted when we got to L.A., I feel quite sure I would have withered away from sorrow.

Eventually, I did begin to think that maybe I could one day have a relationship with someone who wasn’t Dennis. My friends introduced me to a friend of theirs who was in town from Australia for their wedding. We had a lovely time together during the entire weekend of their fabulous celebration.

You know what “a lovely time together” is a euphemism for.

Six months later, my same newly-married friends introduced me to a friend of theirs who was in town on business from upstate New York. We had a lovely time together for an entirely memorable weekend.

I realized afterward that it was especially nice that neither of these men lived in Los Angeles. It seems I wasn’t ready to have a long-term relationship with someone who wasn’t Dennis. Also, both of them were allergic to cats, so they each announced that they wouldn’t be setting foot in my apartment. Ever.

A year and a half later, a big group of us who loved Dennis gathered at St. Nick’s Pub near the Beverly Center to celebrate what would have been Dennis’s fiftieth birthday. I remember when I came home that night, I kept wondering if I was going to die just from the physical effort of crying so violently.

That was a Thursday. The following Sunday, I had been invited to a party at Molly Malone’s on Fairfax.

Clearly, Irish bars were figuring prominently in my destiny that week. 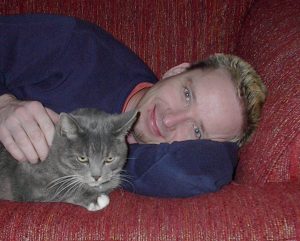 My friend was dating a musician and he was celebrating the release of his CD. My friend had placed an ad in L.A. Weekly announcing this. A few months before, as fate apparently was determined to have it, a guy named Tom had moved to Los Angeles from San Jose to pursue his music career. My friend’s boyfriend was in a band that Tom had followed with great enthusiasm for many years, so when he read about the CD release party in L.A. Weekly, Tom made plans to be there.

I’m going to confess that I don’t remember all the details of meeting Tom because Molly Malone’s has a lot of excellent beers on tap. I do remember seeing him as soon as he walked in and I do remember thinking that he was very handsome. It didn’t immediately occur to me that he might be younger than I am. That only became clear when he gave me his e-mail address and it included four numbers that indicated a year that was ten years after the year of my birth.

Tom drove me home and I gave him my phone number. He called in two days and didn’t specify an evening for us to get together. He just said, “So when can I see you again?” Which I found entirely charming.

Tom began spending a lot of time at my place. In the company of my three wonderful cats. And ended up doubled over, gasping for air. 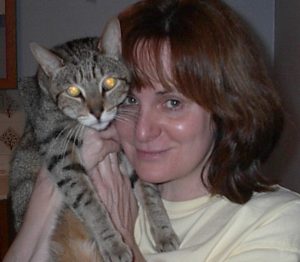 A visit to an allergist showed that he wasn’t allergic to anything except cats. He told the doctor that he would do whatever was necessary to be able to live with Sam and Gus and Marpie because, “I’m not giving my girlfriend the ‘It’s me or them’ ultimatum. I know which of us she’d pick.”

And he was right. They were there first. I made a commitment to them.

Tom passed the litmus test perfectly. We’ll be married for twelve years in November. For richer, for poorer, in sickness and in health…

I’m deeply grateful that we both take our commitments very seriously.

2 thoughts on “Allergies, Shmallergies…It’s All About Loyalty…”

Those Who Leave Us Behind
OH, YES, I DO THINK OF MYSELF AS QUITE THE AUNTIE MAME…