OUR MAGGIE – THE LEMONY-EST OF LEMON BEAGLES! 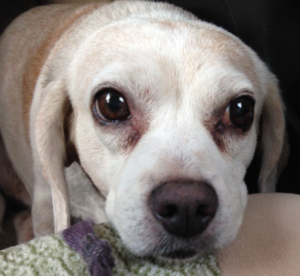 She was nine years old when we adopted her in 2012.  Our dear and big-boned and goofy beagle girl Geneva had passed away a few weeks earlier.  Chester was the only dog in our family, and he needed a pal.  We also needed to rescue another senior animal, because we had the room in our home and certainly in our hearts.

Chester was so funny and cute during our visit.  He didn’t seem to want to interact with any of the dogs.  He just patrolled the periphery of the area, his hound nose to the ground, with a look of tremendous seriousness.

Tom and I just adore Chester. 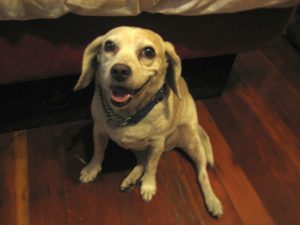 Driving to Apple Valley on that particular afternoon was more of an excuse to take a lovely trip than an actual mission to bring a dog home with us that day.  Connie had received an application from people who were looking to surrender their dog to the rescue group, and she had a feeling that the dog would be perfect for us.

Connie was absolutely right. But I’m getting ahead of myself…

I have a tendency to do that…

We visited with Connie and the other wonderful people of the Beagles and Buddies team for a bit, and of course we also petted as many of the wonderful rescued dogs there as we could, and we agreed that we would come see Maggie the Lemon Beagle as soon as she was brought to Beagles and Buddies. 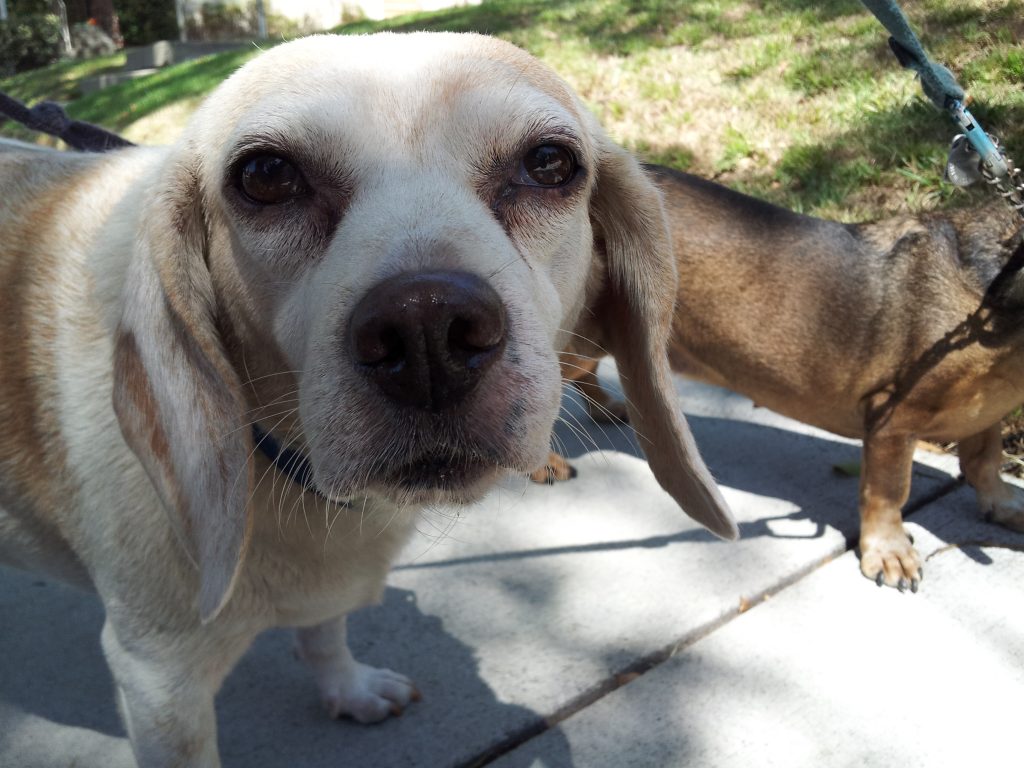 I don’t think I had known that there are lemon beagles before we heard of Maggie.  She’s not a tricolor, as you can see.  She’s mostly white with patches of beige.  And like all beagles, regardless of shading, she is absolutely adorable.

But I’m getting ahead of myself…

On the way home, we walked around beautiful Big Bear Lake.  People strolling on the shore paused to admire Chester as he toddled along on his jaunty, little legs, and of course it always makes me smile when he is fussed over.   We stopped at a Mexican restaurant near the lake that had an outdoor patio.  A woman and her dachshund puppy were on the patio when we arrived.  Of course I went nuts when I saw the puppy. 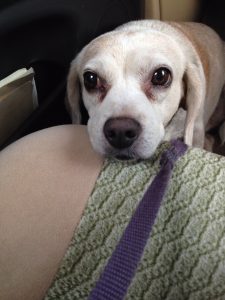 The puppy desperately wanted to play with Chester.  Chester stood, unmoving, and looked quite miserable while the little dog leapt and frolicked around him.  I think our boy was overwhelmed from having spent so much time around so many dogs at Beagles and Buddies.  When we got in the car, Chester immediately fell asleep on my lap and didn’t stir until we got back to our house.

A few weeks later we took the shorter drive to the Beagles and Buddies location in El Monte, where we had originally met Chester and Geneva.  The group was transitioning from their old space to their new space, and Maggie was at the old space, along with several other dogs.

Connie led us to the courtyard outside the house where Maggie was being kept.  Connie opened the door, and this wriggling bundle of fur with her tail wagging non-stop came running outside.

And I have to shout this, because it merits shouting…

SHE WAS SO ADORABLE, I COULD BARELY STAND IT!

One of the first things Maggie did was put her front paws up on Tom’s knee and beg to sit on his lap.  Tom picked her up and cradled her like an infant and she melted and he melted and that was it.  We were now a family of four.  And we didn’t consider changing her name for several reasons:  She was used to being called Maggie, and Maggie is a human name, and one of our favorite people in the world is our friends’ daughter Maggie, so our new pup being named after her seemed perfect.

Chester and Maggie got along right away.  They are both such sweet, agreeable dogs.  No jealousy.  Just lots of affection.

Have I mentioned lately that we absolutely adore them both?

The first week we had Maggie with us, she did two things that absolutely broke my heart.

She is such a cheerful girl. She’s always wagging her tail, and it looks like she’s always smiling. She was like that from the first moment we saw her.  On her first day with us, I took Maggie and Chester on a walk around our neighborhood. Shortly after we started out from our house, Maggie began trying to pull me up one driveway after another so she could get to the front door of the houses we were passing.

I could feel her thinking, “Is my family in there?  Is that where my family is?”

A few days later, we were out walking and we saw our lovely friends who live three houses down from us in their front yard.  At that point, their twin girls were just starting to toddle around.  I walked toward the parents and their daughters to introduce them to our new dog.  As we got closer, Maggie’s personality seemed to change.  Her tail stopped wagging.  She seemed very serious to me.

Maggie walked right up to the girls’ mom, Louise, who was kneeling down to pet her and Chester, and she leaned against Louise’s leg.  I could see Maggie looking from Louise to the girls.  I could feel her thinking, “Are those my babies?”

When we had visited Beagles and Buddies, Connie had told us that Maggie’s family gave her up because they had twin babies.  It wasn’t that Maggie wasn’t doing well with the babies.  It was just that having babies and a dog was “too much for them.”

Don’t get me started.

Seriously, do not get me started.  The best thing I can say about Maggie’s former family is that they got her to a no-kill shelter.  A nine-year-old dog at a public shelter would have had very little chance of not being euthanized there. 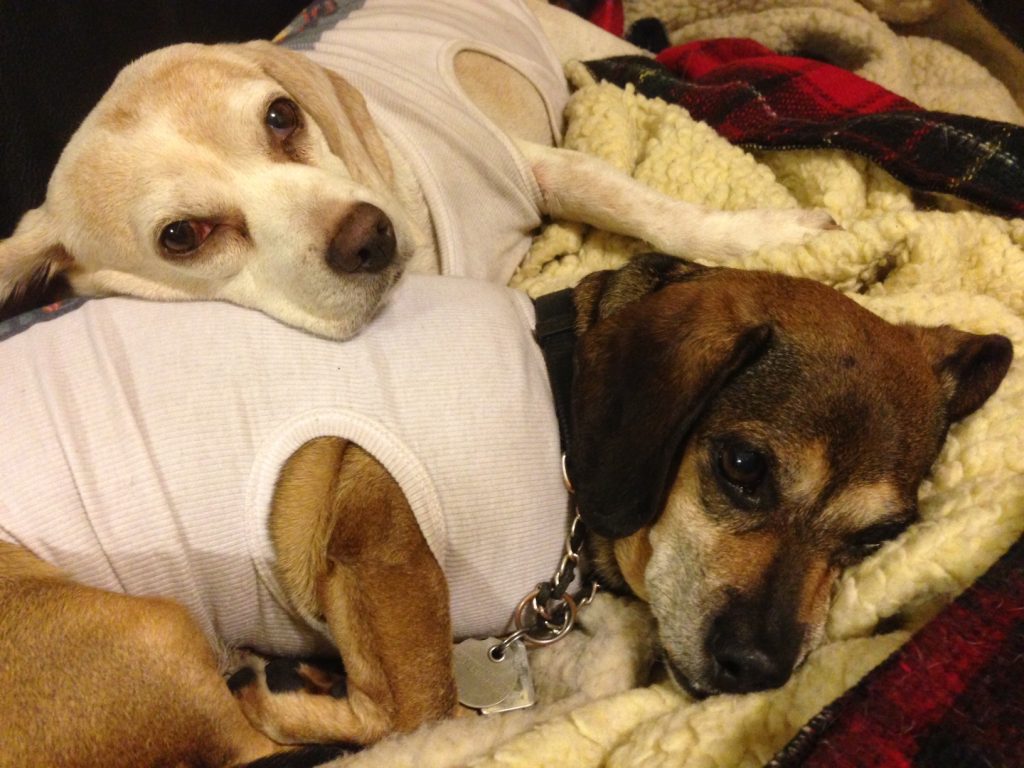 We have now had our precious Maggie (a.k.a. Magpie, a.k.a. Moo-pie, a.k.a. MooMoo) for almost five years.  She knows where her family is.  We are her family.  Forever.  And, once again, we are the lucky ones, because we get much more than we give.