Skip to content
Stuff That’s Important to Me ‘n’ Stuff – Chester
OUR MAGGIE – THE LEMONY-EST OF LEMON BEAGLES!

Okay, so, I’m thinking maybe we alternate the Precious Pets Past and Present Posts (wherein I reflect on the beloved cats and dogs that are and have been in my family, and also pause to go nuts over the sublime delights of alliteration) with posts about different subjects to, you know, vary the tone and tenor ‘n’ stuff.

This post has to be about language. And grammar. Stuff I love and stuff that drives me flipping crazy. Herewith a staccato selection of highs and lows, as viewed from my soapbox.

It’s not “[insert name] and I’s house.” The possessive is “my,” for the love of all that is gracious and holy in this wacky world. I have been hearing and reading “I’s” far too often lately. Hearing or reading it once would be once too often. As far as I know, the construction “I’s” doesn’t exist. It is completely and irredeemably wrong. My opinion, as you can no doubt tell, is not on any level humble in the case of this dreadful new blight on the gorgeous English language.

I am a stickler for good grammar. I do not appreciate the “language is a living thing and it evolves” school of thought. To me, that signifies that something that was once wrong is now correct because we’re too lazy to be careful in our writing and our speaking.

Take a look at my personal Facebook page (I try to be less strident on my Author Page on Facebook because, you know, marketing ‘n’ stuff…). I get on my soapbox about grammar on a regular basis on my personal page. Enough so that close friends and also people I only know through Facebook will pay me the compliment of posting something about grammar on my page because they thought of me when they saw it. 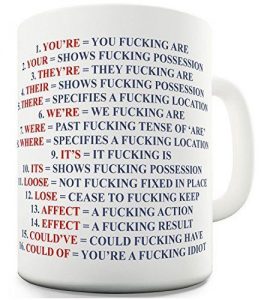 This mug is an excellent example. This mug is my psyche painted on ceramic.

The Oxford comma? No discussion. I always use it. ALWAYS.

And how much do we love that the words “psyche” and “ceramic” start with different letters, but still have the same opening sound?

Because it’s ENGLISH and it is FABULOUS! And it is such a difficult language to learn because sometimes there are no rules and you just have to KNOW that it’s pronounced that way.

I have family and a lot of friends in Europe. They all speak English beautifully. Because they started learning it in school at a very early age. Why we don’t, in most cases, teach foreign languages here in the U.S. until middle school is beyond me.

And when I complain to my European friends and relatives about the intricacies of their native languages (WHY do some adjectives in French appear before the noun and others appear after? That is CRAZY!), they tell me to please get over myself because why is “though” pronounced like “go,” “through” like “too,” and “cough” like “off,” while “rough” has an “uff” sound, “plough” sounds like the “ow” in “flower,” and “thought” sounds like the “aw” in “saw,” even though they all share the same “ough” letters and what’s the rule with pronouncing “ough” anyway and how do you know when it’s pronounced which way?

And that’s when I hang my head in hypocrisy and mutter something to the effect of, “Well, I’m not sure that there is a rule…you just…have to…know…”

I learned German when I was two. My mother was German, and so my family spent a lot of our vacation time visiting her parents and sisters and their families in Bavaria.

It is ridiculously easy for toddlers to learn a foreign language. Family rumor has it that I was speaking German in a day or two. And when I speak it now, I don’t think in English and translate. I just think and speak in German.

I do not, however, know when to use der or die or das (or dem or den) or whatever the hell is going on with all those forms of the three definite articles in German. Masculine, feminine, and neutral. French has just two, masculine and feminine. Just two. Yeah, WAY easier in French. Not.

WHAT IS WRONG WITH HAVING JUST ONE DEFINITE ARTICLE? HUH?

It’s “the.” It’s always “the” in English, no matter which noun follows it, no matter what its position in the sentence. Nice and easy, people! Just like it should be!

I’m learning French as an adult. A very different experience from my effortless absorption of German. But it’s fun and I love learning another language, especially such a gorgeous one.

Okay, back to my own fabulous native language… What has happened to the letter “t”? And the letter “d”? Why are they being ignored? I watch that show I’m addicted to… I can’t believe I’m admitting this… Yes, I can’t stop watching “Say Yes to the Dress”…and the brides are shopping for their dream wedding dress and they say they want something in “sah-in” and something that’s “eleganh” and if they disagree about something they say, “No, I dih-en.”

CAN WE PLEASE JUST PRONOUNCE THE LETTERS THAT ARE SUPPOSED TO BE PRONOUNCED? PLEASE?

So, in French, the sentence “I went to Paris on a Tuesday in January” reads: “Je suis allé à Paris un mardi en janvier.” And I’m reading that and I’m thinking, what, no Mardi, no Janvier?

Sometimes you have to write “kinda” instead of “kind of”…because it serves your writer’s voice better that way.

By the way, the opinions expressed herein are entirely and only my own. As if that wasn’t already abundantly clear.

Yiddish, I must add, is also delightful. I can understand a lot of it because I speak German. And I lived in New York City for sixteen years, so there’s also that…

Schmutz. That’s a great word. In Yiddish and in German.

And you don’t feel badly unless you are touching something and you are doing a substandard job. You feel bad about society’s growing inability to pronounce the letter “t.” Not badly. Adverb. Adjective. There’s a difference.

Phew. That felt really good. I think it’s time to break out the wine and pour a big glass and see if there’s a marathon of “Say Yes to the Dress” on any of the cable channels. Thank you for the opportunity to share my raving and venting and ranting and to go on and on and on. Next week, back to the saga of the sweetest souls in my cat and canine cavalcade, starring Maggie the Lemon Beagle!

Stuff That’s Important to Me ‘n’ Stuff – Chester
OUR MAGGIE – THE LEMONY-EST OF LEMON BEAGLES!