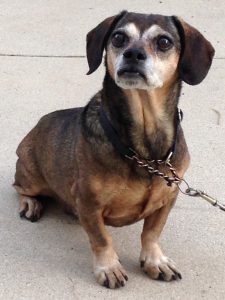 So, since writing my blog is already starting to feel like I’m having a lovely conversation with friends old and new, I thought I might share with you some of the subjects that are really important to me. And one of those has to be animals. Which leads me to want to tell the stories of the animals in my life. I thought I might start with the ones who are currently in my family, in order of arrival.

Our beloved beagle Eunice Petunia (she’ll be the subject of a future blog post) had passed away the week before Christmas in 2008. We had had two precious cats pass in the time that Eunice was with us, so for half a year she was the sole pet in our family. Her loss, while not unexpected because of her advanced age, was heartbreaking.

My lovely husband Tom will tell you that I basically spent the entire week after Eunice’s passing taking sporadic breaks from constant low-level whimpering and crying. The house was so empty without an animal’s presence, specifically without her presence.

I don’t remember where I heard of or read about Beagles and Buddies, a no-kill shelter near us in Southern California. But their name was in my head. Christmas was just so freakin’ sad that year. We sent our regrets to the gracious invitations we had received to spend the holiday with friends. I couldn’t be around people other than my dear Tom. We went to the movies (“Role Models,” a highly underrated comedy that I have watched over and over again because it is adorable) and then we went to one of our favorite hip diners in West Hollywood and ate vegetarian comfort food (starch…lots and lots of starch). And then we went home so I could cry some more in private.

I woke up the next day with a profound sense that I had had enough of this empty house we were in. I checked the Beagles and Buddies website. They were open on the day after Christmas. A sign from the Universe. I know that a lot of people can’t get another pet right after one of theirs dies. I’m sometimes like that. This was not going to be one of those times.

I woke Tom. It is not easy to wake Tom. Tom is not a morning person. That’s an observation, not a criticism (okay, maybe a brief, tiny moment of criticism… I wake up in full-on energy mode — which, I have to admit, can be very irritating to someone who spends the first conscious hour of his day grunting monosyllables with his eyes half closed).

I knew I needed to get Tom up and out as quickly as possible. So I opted for the invigorating qualities of screeching.

“WAKE UP! BEAGLES AND BUDDIES IS OPEN! WAKE UP!”

We stopped to get my beloved husband coffee on the way to the shelter. I was basically pulsating with nervous excitement all the way to El Monte. I can’t imagine that being in the car with me was an especially convivial experience that morning. Poor Tom. He’s a saint, as any friend of ours will tell you.

We parked a few spaces down the street from the shelter. The moment I got out of the car, I noticed an unusual kind of energy vibrating in the air.

“Beagles,” I gasped. Their baying was shaking the ground as I ran to get to the gate of the shelter.

Connie is the founder and director of Beagles and Buddies. She’s just great. We all love her. It was a busy day there because it was a holiday, but Connie gave us her full attention. I told her all about Eunice. While I was crying.

I imagine she gets a lot of that.

We explained that I had in mind adopting two bonded female beagles. And they had to be seniors. I feel that adopting senior animals is my special calling in life. There’s nothing better than giving a gray-faced animal a second (or third or fourth) chance at a happy life.

I know that makes me sound like I think I’m an especially wonderful person…but I do it for entirely selfish reasons. The first one being that I absolutely don’t have the patience for all that puppy energy; I really like sitting on the couch with my seniors napping next to me, and they do a lot of napping. The second reason being that you get much more than you give when you rescue a senior. Trust me on this.

We had adopted Eunice when she was 12 years old. Tom’s only request of our new pets was that they maybe be a little younger than Eunice was when we got her. Connie led us to one of the sections of the shelter. It was a lovely place (they have since relocated to Apple Valley and are in a much bigger sanctuary space) and was built around a house. They had beagles and they had buddies. There were big dogs and little dogs running around. The section Connie brought us to had a concentration of beagles. As soon as we entered the space, the lovely hounds ran up to us and demanded our attention. There were probably at least 40 dogs surrounding us.

I don’t do well when I’m overwhelmed. I was nervously smiling at all the baying and jumping and tail-wagging dogs. And I thought I was going to pass out.

“Tom, Connie, I need to not be here. Pick two beagles. Whichever ones you want. I need to sit down.”

I ran back to the cute, comfortable courtyard (Do you love alliteration as much as I do?). I sat on a bench next to a patio table and put my head against the side of the table. I closed my eyes and tried to breathe. In just a few moments, I felt the table jolt as a weight dropped on it. I still had my exhausted eyes shut when I felt a presence near my ear and a snort of breath. I opened my eyes and turned them toward the exhalation. 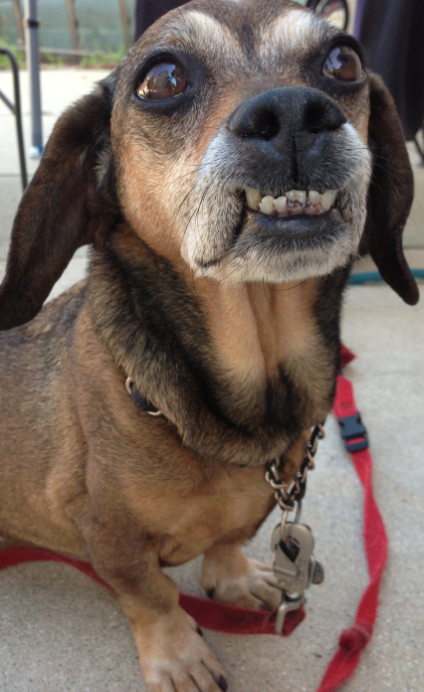 And saw him. Staring at me. He had legs like drumsticks. And I saw something amazing on his face.

I think the two of them may have feared that I was having a breakdown. They came running out of the beagle enclosure.

Connie told us that Musketeer had been with them for only a few days. He had been rescued from a substandard city shelter in Fresno (Tom’s hometown).

Connie told us that Musketeer was around five years old.

It was a classic done deal. I asked Connie to please just pick out a senior female beagle for us to adopt along with Musketeer (yeah, that name was going to be history, pronto). She came out with a lovely tricolor girl named Jasmine.

“Wow, that is one meaty beagle,” I said to Tom when we first saw her. Eunice had been very petite. Jasmine was a sturdy girl. A very sturdy girl.

Musketeer and Jasmine had not been together at Beagles and Buddies, having been kept in different parts of the sanctuary. They rode the half hour to our home together in the back seat. They behaved as though they had known and liked each other forever. Such lovely, sweet little souls.

We always give our pets human names. We considered Jerry for our new boy. And Oscar. Chester was the name that stuck. Jasmine is indeed a human name, but we didn’t feel she looked like a Jasmine, so we named her after Tom’s grandmother, Geneva.

You know how all pets have a piece of your heart? And how some are just connected with you in a way that is unique and intense? Chester is that one for us. We had a special bond from the first moment; that was true for me and for Tom.

My dear late mother never met Chester. She was on the east coast and was no longer up for traveling, so we always went to visit her and my dad, and the kids stayed in Los Angeles with their wonderful pet sitter. But my parents got tons of photos of him and of Geneva (and Maggie and Squeaks and Mr. Joe and Sam and Gus and Faithie and…and…and…). My mother had a heavy German accent. Her assessment of Chester was: “Oh. That little one. He looks sad sometimes.”

An entirely accurate and lyrical description.

Over the years, Chester has been given the nicknames Chessie, Chessie Badoo, Westchester County, Manchego, and Yootza. Yootza is a character in my two Lala Pettibone novels. I don’t know where that name came from. One day, I just felt that he was telling me his nickname was Yootza. It suits him.

Chester is around 13 years old now. His face is gray. He’s doing well and has a lot of joyous energy, especially for a senior. We love him more than ever, if that’s even possible, which it apparently is. I now help with the Beagles and Buddies Facebook page. We are part of the Beagles and Buddies Family. We always will be. And while we are indeed giving a lot of love and care to Chester, we get much more in return. Trust me on this.