I was raised Catholic (yeah, like my Italian family name didn’t give that away…), but I haven’t practiced any organized religion for decades. I think I’m most accurately described as an agnostic. I really, really, really hope there is some loving and benevolent force guiding the universe, but I often fear that there isn’t. Because, for the life of me, I can’t figure out how, if there is a benevolent force, the Holocaust could happen and how Syria, as just one current example, could be such a place of relentless cruelty.

But…and I hope this doesn’t sound glib because it doesn’t feel glib to me…the addition of a new member to our family four years ago gave me an unexpected sense of the possibility of the divine. 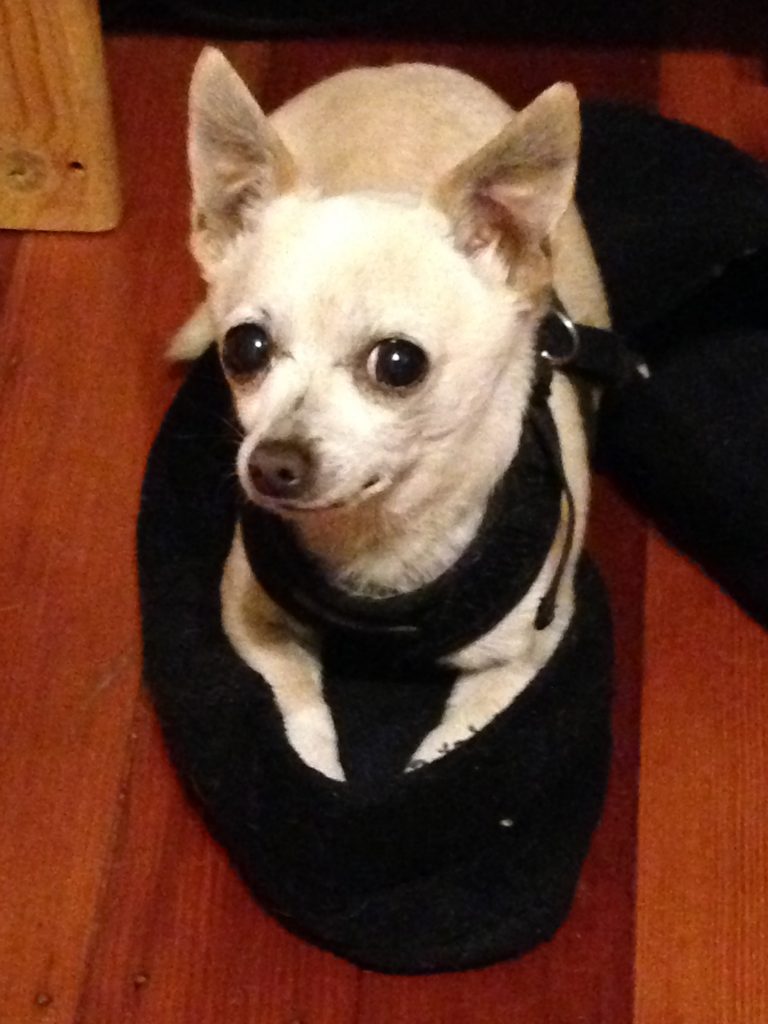 Okay, enough pondering of unanswerable questions and the nature of faith for now…

When Tom’s father passed away suddenly, he left behind two dogs, a Labrador and a Chihuahua. It was decided fairly quickly that Tom’s oldest brother and his family would adopt Tess, the Labrador, and Tom and I would adopt Squeaks, the Chihuahua.

Because that’s what responsible, caring people do. Having a pet is a lifetime commitment. Not just your lifetime, their lifetime, too.

Yes, I’m getting on my soapbox.

I volunteer for the cause of animal welfare. I’m a member of a small animal rescue group here in Los Angeles. We are constantly getting phone messages and e-mails from people who are conveying that a family member died and if we don’t take in their dogs/cats, they’re going to bring them to the pound, where — as we know all too well — the poor animals will most likely be euthanized.

Don’t get me started…

A lifetime commitment. Not just yours…theirs…

Tom drove to Fresno to work with his brothers to get their father’s house and other belongings in order, while I stayed home with our senior darlings, Chester and Maggie, the ones you met before in this blog. Tom would be bringing Squeaks back with him.

Squeaks is also a senior. Our three kids are about the same age, fourteen or so now. I was nervous about disrupting our calm and happy equilibrium with Chester and Maggie by bringing another dog into the house. What if they didn’t get along? What if teeth were bared? What if there was growling and fighting?

I really like to avoid conflict. I know that’s not the best quality for a writer to have. I remember being in a creative writing class and hearing the teacher say that all stories, comedies included, must have some conflict, and I thought, “Crap, now you tell me…”

Tom and I decided that we would let the kids meet each other outside, because we had heard or read somewhere that it’s good to introduce dogs to each other on neutral territory. So when Tom pulled into our driveway, I put leashes on Chester and Maggie and we walked out our front door together.

Carrying the tiniest dog I had ever seen…

Seriously, I have had cats three and four times bigger than the little guy who got out of the car with Tom.

Tom put Squeaks on the ground. Chester and Maggie approached him. Sniffing ensued, per the rules of canine communication. I was very, very, very nervous that they wouldn’t accept each other. I gave Chester’s and Maggie’s leashes to Tom to hold because he is considerably more relaxed than I am, and I had read that dogs can sense their guardian’s tension through the leash. Or something like that.

So there was Tom and there were the three dogs right next to each other and I was terrified that I would be hearing sounds of dreaded conflict and I would have to start screaming for Tom to separate them before they killed each other. Which is very helpful in a crisis. Someone yelling like a lunatic while not actually doing anything to fix the problem. Yeah.

More sniffing. Some staring. No noise. No problems. Nothing negative.

Welcome to our family, Squeaks.

I honestly can’t begin to convey how proud I am of Chester and Maggie. They are such generous and loving souls. There wasn’t a moment of jealousy from them. It was as though they said to Squeaks, sure, come live with us. Be our brother. There’s enough love to go around.

I love all dogs and indeed all animals, but I don’t know that Chihuahuas would necessarily have been on my Top Ten list of favorite breeds before I met Squeaks.

Well, now that we’ve had Squeaks for four years, I am Chihuahua crazy. Along with being Beagle and Dachshund and Greyhound and Bulldog and Cocker Spaniel and Pug crazy. To name just a few.

Let me pause to say that, of course, “Rescue” is my favorite breed…

Squeaks is a total, clichéd love bug. He is a snuggle bunny. And he is the undisputed leader of the pack here. This was established very early. Maggie has a rather unfortunate habit of bolting down her food and then, if we don’t stop her, barreling over to Chester’s food and pushing him out of the way so she can finish whatever is left in his bowl. Chester, being supremely easygoing, just gives her a perplexed look when she does that and walks away to let her eat his food in peace.

Maggie tried that with Squeaks the first night he was here. She finished her food and headed toward Squeaks. We weren’t paying enough attention, and she got to his food bowl before we could stop her.

Squeaks had his head down and was happily chewing his food. Maggie came over and was about to push him out of the way. Squeaks didn’t bother to raise his head. He just growled. Calmly, at a low, distinct volume.

Maggie stopped in her tracks. She stared at Squeaks. Then she turned around and wandered off. She hasn’t gone anywhere near his bowl while he’s eating ever since.

Chester and Maggie and Squeaks absolutely adore each other. We have two large doggie beds for them in the living room. It is very unusual for them not to squeeze into one of the beds together while the other one remains entirely empty.

Squeaks, by the way, also goes by the names Squeaky Boy, Squeakserdoo, and Sir Squeaks-A-Lot.

Children love Squeaks. He’s like a living toy to them. When we’re out walking with our trio, people marvel at how tiny he is.

Which brings me back to my original point…

Squeaks weighs around four pounds. He clocks in at considerably less mass than my head (I do have a freakishly large head…). And contained in those four pounds of matter — such a tiny amount — there is every emotion possible.

The world must be so large and imposing to him, but Squeaks faces it with love and trust. He is dear and sweet and kind and funny and ebullient, and his emotions and his worldview are, to me, no less meaningful than the emotions I treasure in the people I love and admire.

And, to me, there is something mystical and divine in that…

A Blog Post Wherein I Get Over Myself
Book Launch Party!