Skip to content
Being Transported By Romantic and Sexy Movies
And What Author Doesn’t Love to be Interviewed for Her Alma Mater’s Online Newsletter?

Los York and New Angeles – Or, As I Like to Call It, My Adult Life

I went to college in a small town in Connecticut, having grown up in a small Connecticut suburb of New York. No disrespect (Don’t you love sentences that begin with “No disrespect…”? Because you know something snarky is about to follow…) to the people who love living in the bucolic calm of suburbia, but you couldn’t get me to the big city fast enough once I had my B.A. in my sweaty, eager palms.

I moved to Manhattan at a time when you could actually find a one-bedroom for considerably less than $3,000 in monthly rent.  And I lived in the City (THE City) in various apartments for sixteen glorious years. Then I moved to Los Angeles, where I have lived for the past twenty-two years, and from where I never intend to move. Never. Not ever. Ever.

Herewith, a few very random thoughts on the Big Apple and the Big Orange (this is an actual nickname for L.A.; I looked it up). All opinions expressed are my own. Like I needed to tell you that.

And no disrespect to the four other boroughs, but when I write “New York,” I’m always referring to the Glorious and Incomparable Island of Manhattan (which is, I believe, the official name given to that magical place by the British when they took it from the Dutch…or something like that…).

New York is the best city in the world.

Los Angeles is the best city in the world.

These two statements are not contradictory. No need to try to disprove my point by schooling me on the definition of “best.”  I know what “best” means. And I’m also old enough to have learned that stuff can be true without meeting the strictest standards of definition. Some stuff is true just ‘cause it’s true.

People will live in spaces in New York that no reasonable person would ever define as an “apartment.” Because it’s in New York. I lived in a fifth floor walk-up with the bathtub in the kitchen. Because it was cheap and it was within walking distance of Bloomingdale’s. And I loved every minute of it.  Except for the times when the cockroaches ran across the floor while I was rinsing off with the hand-held showerhead. And, P.S., try schlepping bags of groceries up five flights of stairs. But I did it all…because I was in Manhattan.

The weather in L.A. is brilliant. Absolutely brilliant. The first months I lived here, I was missing New York something wicked.  And then it was February, and I was walking along the beach in Malibu in shorts. And I remember thinking, yeah, I can live here…

L.A. pretty much has anything you can get in New York. We have theater. We have museums. We even have good Chinese food and good pizza and good bagels. They are just WAY more scarce than they are in New York, so you have to hunt for them, as opposed to finding them on each and every block. 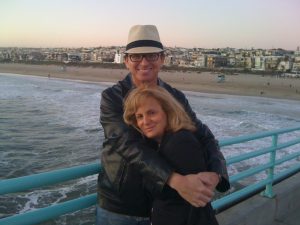 New York has great beaches, and they’re as lovely as the fabulous beaches in Southern California. Granted, I’m not strictly talking about the Island of Manhattan here… I’m referring to Montauk, on the tip of Long Island. Go there and tell me the beaches aren’t gorgeous. Go ahead, I dare you. I’m already calling bullshit on that if you even try to tell me, so maybe don’t waste your breath…

Central Park is brilliant. Can you imagine New York without Central Park? No, don’t even go there; it’s too distressing…

The Hollywood Bowl is brilliant, but getting to it can be a huge pain in the ass. Don’t let that discourage you, though. It’s a must-see/hear location. 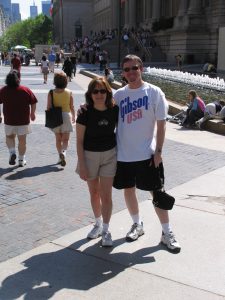 People do walk in L.A. I’m one of those people. I love walking in L.A., as much as I love walking in New York. Once, when I was living in West Hollywood, I took a delightful half-hour walk to my dentist’s office in Beverly Hills. Upon entering the office, the office manager must have noticed that I was a little schvitzy. She asked me what was wrong, and I told her absolutely nothing was wrong, I had just had a lovely walk to the office. She knew where I lived. Her eyes got huge, and she gasped, “But you live in West Hollywood! That’s impossible!” This is the very reason why people write disingenuous pop songs about nobody walking in L.A.

Hiking in L.A. can be utterly fabulous. You can hike up to the Hollywood sign. And you should and must.

New York has it way over us in terms of history. Walk in the Financial District in New York and see where President Washington was inaugurated for the first time. We have nothing like that here. We think it’s impressive that El Cholo (a fabulous Mexican restaurant) has been serving food since the 1920s.

L.A. has fabulous Mexican restaurants. New York’s are good, don’t get me wrong. But I don’t know one that’s L.A. good…

I’ve been to vegan restaurants in L.A. and in New York, and there are wonderful options to be found on both coasts, which is a very nice thing, in my forever-less-than-humble opinion.

I still giggle when I think about how narrow the aisles are in grocery stores in Manhattan. And we still don’t have anything to match a bodega here in Los Angeles. Salad bars. I miss easy access to superb salad bars. Here, I have to drive to get to one.  But once you get there, they’re great.

The celebrity sightings are legion in L.A. and in New York. And the show biz atmosphere is lush in both cities. So that particular metropolis-v.-metropolis skirmish is a wash.

Driving in L.A. is nuts. NUTS. Rush hour now lasts from 7:00 to 10:00 in the morning and from 3:00 to 7:00 in the evening. At a minimum. A BARE minimum. And people on the freeways will tailgate you at 80 miles an hour, which is NUTS. Also, just about no one signals when they change lanes in L.A., which is just NUTS. And really irritating.

Nobody drives in Manhattan. Nobody. Why in the hell would you?

It’s actually difficult to get a good dinner in L.A. much past 10:00 p.m. during the week, unless you go to a 24-hour diner.  Which is ridiculous. In New York, you can get food at any hour of the night. I used to order pizza and light beers at 4:00 in the morning. And it was delivered speedily and it was delicious. What’s up with the early-to-bed stuff, L.A.? That’s a question, not a criticism. Okay, it’s kind of a criticism…

Getting to LAX is a huge pain in the ass. No one expects to be picked up at JFK when you live in NYC and they want to visit you. Don’t get suckered into picking anyone up at LAX. Bob Hope Airport in Burbank, maybe, but not LAX. That’s what Uber and Lyft are for, for god’s sake.

The main branch of the New York Public Library System, on Fifth Avenue and 42nd Street (the one with the lions in front; Patience and Fortitude, named by Mayor LaGuardia) is glorious. The main branch of the Los Angeles Public Library System on 5th Street in downtown Los Angeles (there is, in fact, a downtown in sprawling Los Angeles…don’t ask; it’s weird…) is equally glorious, in a very different way. Visit them both; you won’t be sorry you did.

I do predict, with surpassing affection, that L.A. and NYC will always be in a friendly competition with each other. Because they are the two most fabulous cities in the United States. I’ve never been to Chicago, so no disrespect to the Windy City… 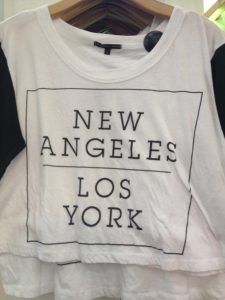 Bottom line? I am convinced that, once a New Yorker, always a New Yorker. And I am also a proud Angelena. I’ll always be in a New York state of mind, and L.A. will always be my lady. I visit the City That Never Sleeps at least once a year, and I live in the City of Flowers and Sunshine (yeah, I know it’s called the City of Angels, but that was too easy; City of Flowers and Sunshine is an actual nickname for L.A.; I looked it up).  Seriously, how lucky am I?

Being Transported By Romantic and Sexy Movies
And What Author Doesn’t Love to be Interviewed for Her Alma Mater’s Online Newsletter?